Allow me to share one of my big research project with you!
The original plan of the research of the results of European Championships was to find a relation between results – national/club programs – qualification systems. There are many things in the development of an athlete (or a team of athletes), which are well known for coaches. However I wanted to give a statistical evident of these things and theories.
The research is (of course) hungarian related and I don’t want to bother you with national details. However just look at this one chart. It shows, that an athlete of a nation with smaller national fleet, needs to participate 2-3 times on Europeans to get a better result. Well it is a clear situation; a sailor needs to get used to the strength of a continental championship. Now we have a chart for that too.

The side effect of the research is more interesting for everybody who is somehow involved in optimist sailing.

The first European Championship was held in 1983, however I started the research from 1988.
In this year the Euroepans was in Hungary, so to get the result list was easy.
I received many result lists from Robert Wilkes, from a former secretary general of IODA. Thank you again Robert! The rest, mostly from 2000 are from my own collection.
Unfortunatelly middle ’90s are strongly missing, so if you „accidently” have them please share with me to make this collection complete. Thank you!

And the same charts about girls:

And a chart about host countries: 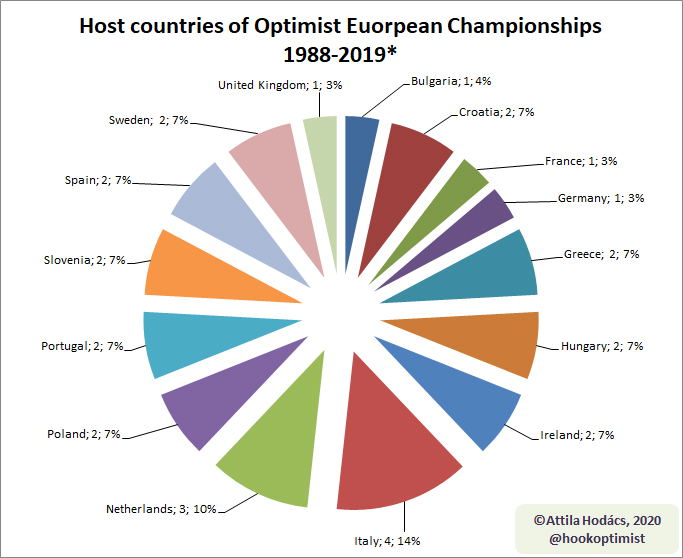 © 2019 made by Neomobil.hu. Minden jog fenntartva.

We use cookies on our website. Some of them are essential for the operation of the site, while others help us to improve this site and the user experience (tracking cookies). You can decide for yourself whether you want to allow cookies or not. Please note that if you reject them, you may not be able to use all the functionalities of the site.